I discovered that my sketchbooks are like weird journals. I go to look at the drawings, but I always find my emotional history, only legible to to me. It must be the best kind of secret language for a diary, so obscure that even the author doesn’t know what will be kept and retold.

Here’s the obligatory struggle page. Over the course of this sketchbook I discovered a lot more about what it actually means to draw. I’m not going to go all philosophical on you, but understanding is the key. Now I understand the function of a sketchbook differently, and that a good sketchbook should be full of bad drawings, drawings made when the intent wasn’t to make something beautiful, but just to understand what I see.

2015 was a world-view-shattering year for me. It was a good thing, and a challenge. After our annual retreat season here in Plum Village, I headed home to spend some time with my family. I don’t really like the word burnout, but people keep using it to describe the state I was in. One way or another it was amazing to be with my peoples in Washington and to take some time to reflect. Airports are great places to draw, as are living rooms on family holidays. Oh and don’t be too shocked about the censorship here. There was a phone number written on one of the pages.

Got some serious wisdom from spending time with my family and friends, and that got my gears turning about all kinds of things, not the least of which was my mysterious impetus to draw. What do I really want to do? Why do I want to draw all the time? I always thought of it as kind of a distraction, but it’s become increasingly important to me. When I came back to France I had a crazy meltdown in which I decided that making art is not an optional or secondary part of my life, so I’m still trying to figure out what that means for my life path. I try to get out of the monastery a couple of times a week to draw people in the market. There are all kinds of beautiful, interesting people at the open markets here in the Dordogne region. I’ve also taken to drawing during the Dharma talks, which is not exactly ideal practice for a monk. But the people are so still! How can I resist? 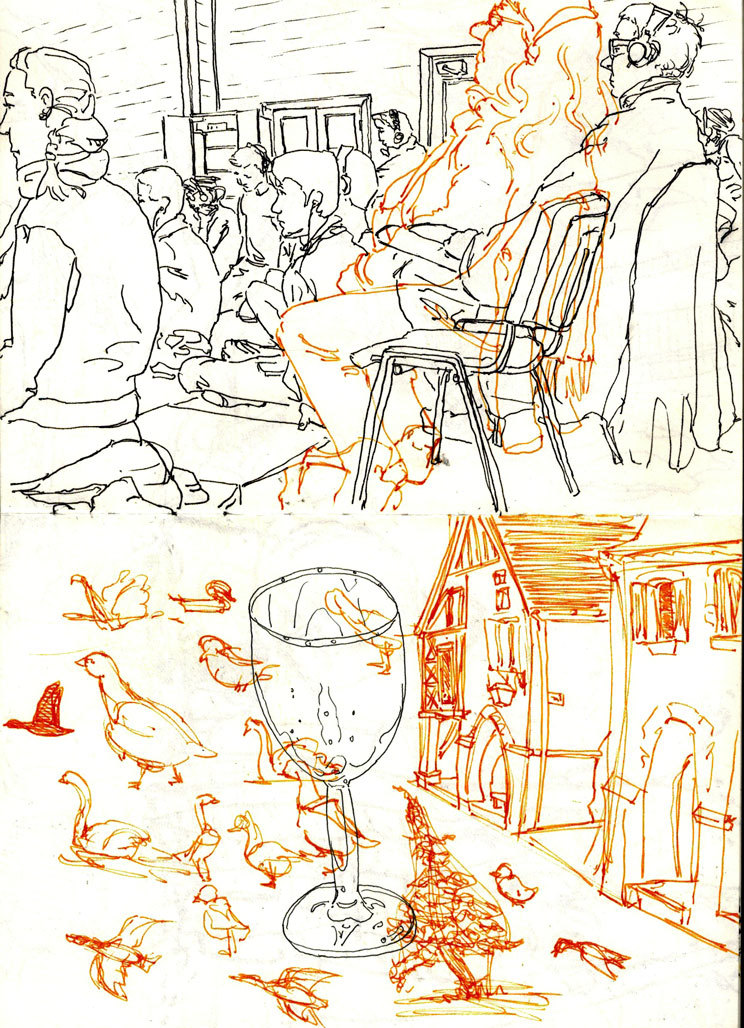 Here’s a page with a drawing I’m actually pretty happy with. The anatomy and everything are all wonky, but I can feel the love between the mother and baby. Also there’s a little gem here from Pham Hanh, the Dutch monk who has a magical touch for mixing up English idioms. Please excuse the profanity.

And just one more farewell image from sketchbook number 2. When I was back home, my new friend Emily somehow convinced me to check out a book called “The Life-Changing Magic of Tidying Up”. The mere existence of a book with such a title suggests one of two things. Either people in this world are very desperate to make a positive change in their lives, or the book is gonna drop some legit wisdom on how to tidy up. The latter turned out to be the case. I’m not going to spoil the ending, but the key is appreciating your things. So in this vein I wrote a little thank-you note to my sketchbook on the last page.

I’m the obsessive self-improvement type of guy, always learning something of dubious relevance. When I was young I couldn’t get my kicks  through being a straight-up badass like my brother, who I assume got some satisfaction out of being universally respectable:

So I had to develop all kinds of unexpected skills and personal facts. In lieu of genuine approval, my ego inflates upon receiving surprise or even aghast at my decided quirkiness. Yeah, I’m wearing orange pants. Because I like orange pants. You think I suck at football? Well I don’t suck at drinking root-beer floats. Don’t like hanging out with me? Well guess what? I like not having any friends.

Well OK it wasn’t quite that bad. And now that I look back, I guess I wasn’t all that quirky either. But I did take home what Napoleon Dynamite said about girls only wanting boyfriends that have great skills. To this end I developed the ability to study like a maniac: with great intensity and very briefly on any given subject. In preparation for my first surfing trip in high-school I spent hours on the Internet researching boards, beaches, breaks, waves and wet suits. The day of our trip, Jake and Connor were blown away by my know-how. Or I guess that’s just know. I never did catch a wave, but then again I was surfing the icy waters of Washington State in a wet suit so thick I looked like the Michelin Man.

I’m not boasting, though I have upon occasion. I’m just laying down an empirical fact: I’m a studying machine when I want to learn something. Over the last year or so, it’s been drawing. I picked it up when I first came to Plum Village, and it’s grown into something of a passion. At first it was hot ‘n cold, you know? But destiny has flung us into each others arms.

After the Winter Retreat ended in January 2015 I found myself in the hospital in Bordeaux, helping to take care of our teacher. He had just woken up from three months in a coma. For those who don’t know, he had couple of massive strokes in November 2014. Me and some of my bros were doing shift work with Thay, and then we had the long hospital days to kill in the hospital hotel. Drawing was my anti-drug. So if you’ll indulge me, I’ll post some shots from my sketchbooks over the past year. My buddy Cole told me that I have to post my crappy sketches too, so I can’t pretend that I picked up a pen and miraculously drew one day. I’ve got a long way to go, and what progress I’ve made is due to practice and nothing else.

Here are a few pages from my first sketchbook. The whole point of these sketchbooks is that they force me to draw real things, people, and situations, so none of these are from imagination. They’re direct recordings of me struggling to understand what I see.

This one is from the hospital. Lots of people to draw in a hospital, and lots of sadness, sickness, and death. We went to the park to feed the birds when we had time. We were like, “Whoa! This park is like bird paradise! There’s like a million different kinds of birds here!” But then we realized that it was bird prison, and all the birds had their wings clipped.

These gems are from a little later, when I was back in Plum Village. The struggle is real. I like the little dude in the bottom right, who was supposed to be human but looks like a penguin on human legs… with a cane.

And here’s the big reveal after the surprise make-over. Four or five months later, some of these ghastly things begin to resemble humans:

Next time: the next sketchbook!